Sometimes you have to write what you know.

And when that time comes, when you spew your emotions on the page, you have to write honestly. You can’t write the glorified version of your feelings, or the way you hoped you’d feel, you have to write it honestly. Which might mean you need to look at yourself honestly. Then you have to bring those feelings, those ethereal gut stirrings, to lexicographical life. It’s not nice, or easy, or even sometimes fun. But it is, if done right, honest. And honest art is a hell of a thing.

Years ago, I was going to write a GREEN WAKE fill in issue for my friend Kurtis Wiebe. I went ahead and scripted the issue, and went through many drafts, but in the end it didn’t end up meeting the schedule. Then, when Rossmo/Wiebe decided they’d put the book up online for free at keenspot, I asked if I could make the one-shot and slot it in between arcs. Kurt was down with the idea. So, I got Nathaniel Ooten and Brandon DeStefano onto the team and we made the issue. It stands as something I am incredibly proud of and you can view the entire thing RIGHT HERE – just keep clicking for the next page until you’ve read all 22 pages 🙂

In the issue, I came to a page where I drew from very close source material. I didn’t have to, I could have treated the familiar subject matter through someone else’s eyes but I wanted to put something real on the page. I wanted to exorcise some demons. If nothing else, writing is always my great therapy.

Our main character has spent a lifetime searching for his father who he believes is in Green Wake. In flashback, we show the father abandoning his wife and son as he jets into his quest for this mythical landscape. It’s an emotional scene to write for anyone.

For me, this sequence had to carry truth. My father committed suicide over 25 years ago now. I was 5 at the time and I was there when we found him and it changed everything about me and my world from that moment onwards. For good and bad. He didn’t leave a note, or any clues in his behaviour or world behind so we never knew why. Trying to piece this puzzle together consumed me far more than it should any child. But I also spent years not really addressing things, and bottling them up, because that’s what I/men do (I mean, worked out so well for my old man, right?).

Later in life, as I became more ‘adult,’ I started to really break down and process what had happened. And how it had affected me. I didn’t just think about the myth and the legend of the absent parent, I thought about the man. I thought about the truth. It’s easily to quickly and silently idolise someone you love after they are gone. It’s harder to admit you hate them for leaving. And it’s insane to truthfully put yourself into that person’s mind on the night they’d make that decision. I now have two kids, my son is nearly as old as I was then, and I couldn’t imagine leaving him at all in any permanent way. I cannot fathom what it’s like to be in that state and I’m glad, because the moment I understand and believe might be the moment I do it so I’d rather be an eternal outsider to that mindset.

But I do know how I feel about it, as the victim, as the affected. I know that my thoughts have changed over time. I know that they haven’t gotten nicer about it all. I know that not every thought we have is nice.

So, I wrote the page below. Read through it. It’s the truth. 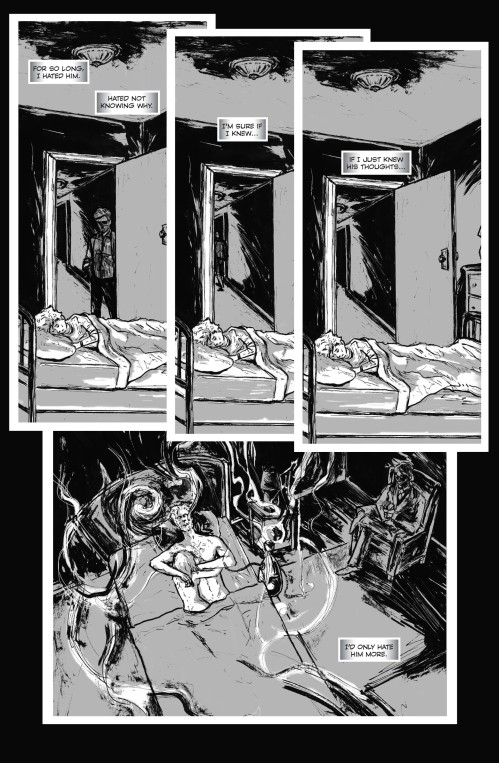 It took me many attempts to write this page. It started off very bloated and text heavy. I was trying to obfuscate my truth with words. I was trying to make my grief sound fancy and noble and interesting. It was on somewhere around the fifth or sixth draft that I finally realised this page didn’t need to sound fancy or smart or clever. This page needed to be raw and real and so quickly came to have less text. The moment I stripped away all the verbiage and rewrote the shorter, punchier captions I have now was the moment I knew this page was done. And I’m still in love with this page to this day.

I hope you’ve got something you wrote that’s personal that you are just as proud of, and I hope you get to write more personal things in the future.

I will, I can promise you that.