DEER EDITOR is a 48 tablet page one-shot which you are going to need in your life. With art from Sami Kivela, letters from Nic J. Shaw, edits from Dan Hill, and words by Ryan K Lindsay, this book is dark and strange and completely what you want.

Bucky is the editor of the crime beat at The Truth. He’s also a deer. This journalistic crime story starts with a John Doe killing and drags Bucky down into a world of political intrigue, a wi-fi enabled grotto, and a station locker full of a story bigger than he thinks he’s tackling.

If you dig CHINATOWN, ALL THE PRESIDENT’S MEN, or TIGER LAWYER then this gonzo pulp fu anthropomorphic slice of crime and words is absolutely a must for you. This issue works as a one-shot story, but there is also room to build many more stories with this fantastic character, and I will get to them in time (the next one is already scripted).

DEER EDITOR will be coming to you on Kickstarter next week as a digital only campaign, where we’ll be selling PDF versions of the book. We are going digital only because it’s something we believe in, but it’s also the most realistic given my Australian HQ situation V international postage. I am not keen on charging large on anything in this campaign. Light price points are a firm stance from me so I’m putting my money (your money) where my bearded mouth is.

$1 will buy you the TABLOID PDF – wherein you’ll find the entire issue.

$3 will buy you the BROADSHEET PDF – wherein you’ll find the entire issue, as well as back matter, sketches, pin ups, design prints, and the full script of the issue in over ~115 pages of crime comic/process junkie goodness.

Beyond that, there’ll be some other cool pledge levels with some ideas I’m really keen on that I haven’t seen done anywhere else before. I think you will be piqued, intrigued, excited, and definitely down. To get further down – so down you’re underground – let’s see a preview: 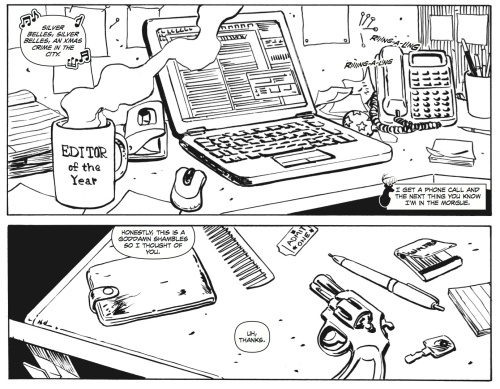 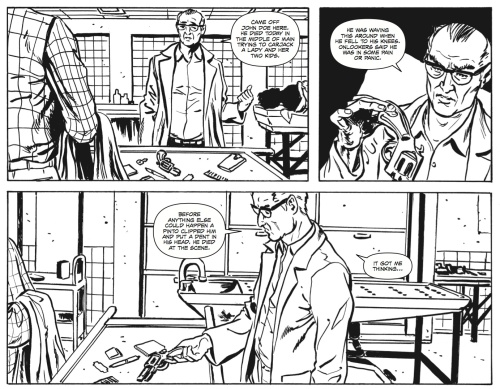 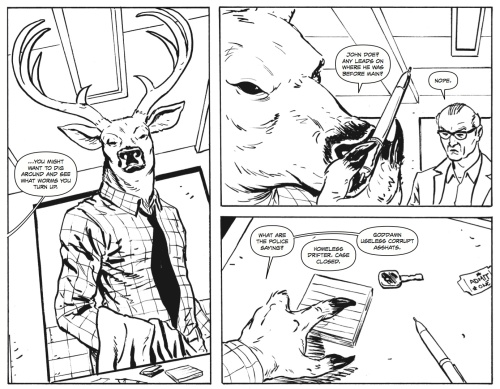 This campaign is to get the creative team paid. Sami Kivela worked his genius fingers to the bone on this book and he got some money but I want to see him riding a space yacht to go get crunk on one of the party moons of Jupiter.

I also want to get some scratch for Nic, Dan, Christopher, and myself.

I also really dig Kickstarter as a tool to reach out to a new audience and get that profit straight into the hands of the creators with minimal slices taken by others, and also proving the project viable so we can continue it in some manner.

You’ve got yourself one week to get excited, tell your friends, ask me questions if you want, and generally bring the ruckus. We launch next week, on Monday/Tuesday (depending on your relationship to the international date line), and will run for a month. Some updates will run here, all updates will run at deereditor.tumblr.com. Tomorrow I’ll run details of the next pledge level, the RKL SCRIPT PDF.

We hope you’ll run with us because you can’t chase down a story walking.