Welcome to my personal spiral, inked with razor steps, and you just can’t stop descending. At the bottom, you know what you’ll see, we all do, and yet we find ourselves there over and again.

I think we all have a problem.

It’s Noirvember in my office all month and you know I don’t suffer alone. So I’m going to write about noir all month long. My noir. My definition, my way, and the things I dig in that ballpit of loaded weapons and bad choices. 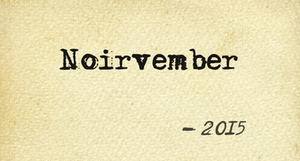 I love noir, I love writing, and I love some weird stuff, so this month the bar is set to discuss a trinket of noir every day. Sometimes I’ll do the obvious, hopefully sometimes I’ll bring a new slant to a thing you’d never considered within that chiaroscuro light. If you discover one new thing to go sample, rad. If you get to remember something cool from the past, superb. If you just feel hollow inside and start to realise everything around you is false and you are only slowly digging your own grave with every turn, every choice, every thought…

Welcome to my world, there’s only one direction you can move so let’s shuffle along to the end of the whole mess.

I find noir fascinating. There’s something painful and insane about watching someone slowly stitch themselves up in their own body bag through their actions and choices. That inevitable dread we all feel but society says we should ignore. The knowledge it all ends. It’s perfect narrative fuel.

And don’t get me wrong, I love other stuff. I do. Pixar have nearly paid out their mortgage in my brain, and you can’t get much further from noir than them. I dig old dumb action flicks, or sometimes I just want to laugh. I’d wager there isn’t a genre out there I don’t have some respect for a huge work in it. But much like our children, or our wives, we all have a favourite. Mine just happens to be the one that kicks me hardest in my guts.

You see, for me, and for my month, ‘noir’ means the perfect downward spiral for your lead character. I dig film noir, but that’s an aesthetic thing, I’m talking under the hood of the story engine we see the fuse has been lit the whole time and you can drive where you want, do anything with your final moments, but you will be facing forward as the final moment obliterates you. And it’s most likely been your fault all along.

Otto Penzler laid it all down perfectly in his Foreword of ‘THE BEST AMERICAN NOIR OF THE CENTURY” [2010] when he wrote, “noir is not unlike pornography, in the sense that it is virtually impossible to define, but everyone thinks they know it when they see it. Like many other certainties, it is often wildly inaccurate.”

This makes me feel better about focusing on my own noir, because I guess there might be shades of black, right?

Penzler goes on to then define noir in a way that’s stuck with me, informs how I see/feel noir, and is certainly how I try to write it also. He wrote, “Noir works, whether film, novels, or short stories, are existential pessimistic tales about people, including (or especially) protagonists, who are seriously flawed and morally questionable. The tone is generally bleak and nihilistic, with characters whose greed, lust, jealousy, and alienation lead them into a downward spiral and their plans and schemes inevitably go awry.”

Maybe now you see why I like noir. Keeping company with the worst people known, watching them fail, hell, making them fail. There’s more to playing god at the keyboard than just letting the characters find themselves. Sometimes you sharpen the punji sticks in the trap, piss all over them, and then lead a breadcrumb trail right across the top. Fun.

And I can’t tell you why I like those bleak ending, it’s not like I enjoy the bad stuff in real life, nor do I actually wish this upon anyone, there’s just something about observing the earnestness of someone, in a peppy or a bleak way, only to see it all disintegrate in their fingers that fascinates me. And it’s that kicker in the end I always focus on, Penzler also writes, “The likelihood of a happy ending in a noir story is remote…No, it will end badly,” and this is because these stories are populated by “the lost characters in noir who are caught in the inescapable prisons of their own construction, forever trapped by their isolation from their own souls.”

I believe writing is therapy and I guess by peering into my darkest places I find myself and hope to liberate something.

I am certain over the coming 29 days you will see my turgid soul laid bare. May you poke and prod it until it rises up to consume you before combusting under the weight of its own drama.

Noir: making me feel better about myself since 1982.