CRIME DOESN’T PAY is an old crime comic they used to put out and in it the criminals always had to come unstuck, or usually flat out die, just so the book wasn’t glorifying crime and criminals and fuelling a whole generational shift to just taking what we want because that Baby Boomer work ethic surely wasn’t going to stick, right?

It’s a pretty weird thing to consider such a mandate as if media has a totality of causation when it comes to making people do things. If so, why don’t a large majority of people live happily ever after like all the stories have told us will happen in the last few hundred years?

And every censor got it wrong anyway because while the comics caper of ensuring we only showed criminals biting the dust in the end would somehow lead to a positive lesson being learnt was no doubt done in earnest it was also all surely undone by one simple flick. 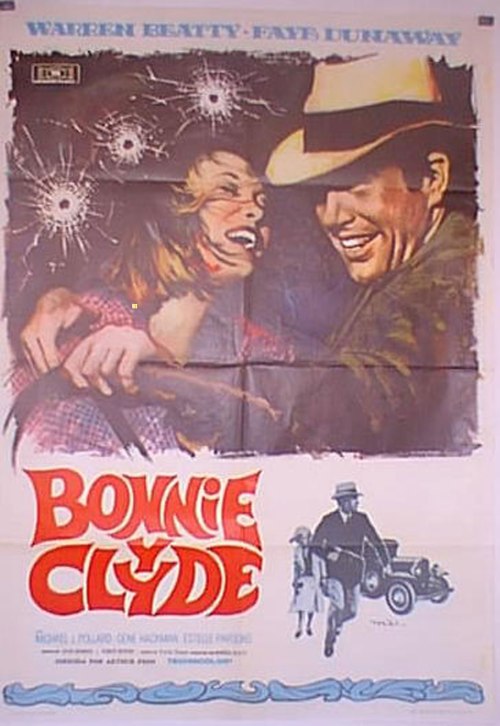 Y’see, in BONNIE + CLYDE, the eponymous criminals are really not happy, they’re not very good at what they purport to do [“We rob banks!” they love to exclaim more than ever prove], and in the end they die in a rain of gunfire. Their story ends in that black warning of death and along the way we even see sexual dysfunction as Clyde struggles to be able to perform for the ever-willing Bonnie. The whole affair is actually quite cringe-worthy to observe and yet I can’t imagine this flick was the deterrent many old school hardliners might have hoped.

Well, there’s this little mental glitch whereby Faye Dunaway and Warren Beatty are just so goddamn good looking that this big cross country mess still comes off as glamorous well before we consider the sad and silly and deplorable aspects. Dunaway wears this hat and she’s gorgeous. The fact she’s crippled by some low self-esteem and is clearly self-destructive is forgotten as we see her make holding a gun in a photo look badass.

Because the dirty little secret is that people will often make poor choices if they are going to look good along the way. Send them a hint of a promise at looking fantastic or mysteriously alluring or straight up sexy and people start trampling over the people they love just to line up to fall down. This is why noir works because we often do know it’s the wrong choice but we make it anyway for the immediate gratification. We trade off the outcome in the hope of living in the moment. Or we probably just know 9 out of 10 people will look back and still think it was all worth it for those glorious minutes.

It’s why crime isn’t short on customers. It’s a gamble, maybe you won’t get caught, but if you do maybe it’ll be worth it. You watch Bonnie and Clyde do their thing, pushing each other further and further into the bank robbery game until there’s nothing left but to double down, or so they feel. There are always options but the truth is they start to like it, and they see the end coming so that’s all the more reason to seize the moments because they are now a finite commodity. You’re not going to waste what little you have left feeling regret or remorse or just plain boredom.

Noir means you went in for a penny and now you’re down for a pound.

Warren Beatty plays that idiotic truth perfectly as he constantly bounces from one bad moment to another because he doesn’t know any other way, doesn’t trust himself to find a way, and so plays off owning the bad because that means he never failed at trying to be good. He’s an idiot, a child, and a firecracker and yet it’s all these things that make him so alluring. You can just as easily read his behaviour to mean easily pleased, spontaneous, and capable of anything. Bonnie certainly gets caught in his dangerous contrails and from there it’s all over for her.

As you watch, you see why these two fall for each other so easily and while you don’t feel it [mostly because you are removed from the situation and so can be analytical without the pressure] you can instantly see why it would happen. The acting, the deft direction from Arthur Penn, everything brings this tale of downfall together so you only ever feel sad for these people. The criminals. These thugs and violent idiots. You feel for them, like maybe you could help them, if only they’d just help themselves a little. But they won’t. And in the end, you can’t look away.

You’ll watch two people walk themselves across their nation into certain death because when noir is this pretty then it is not to be ignored.