It all started with those damn dirty apes. Heston plays stranded astronaut, Taylor, who crash lands in the future on a planet ruled by many classes of the ape family and where humans have been subjugated. For the poor filthy wretches of this planet, the downfall already occurred. So it makes sense that Heston would arrive to lead a revival.

Unlike any of the other human creatures, Heston has language, and knowledge, and he won’t be caged. He challenges the civilised society of ape culture, their rules, their laws, and he demands human dominance be restored.

It’s exceptionally arrogant and that kind of headstrong resolve is exactly the thing you need to keep pushing against all barriers to enact your own noir ending. But sadly, Heston is so forceful he actually ends up triggering a second noir spiral that is unconsidered at first but is exceptionally sour when taken on its own context.

The tale of PLANET OF THE APES winds tight until the final sequence as Heston leads a group of apes into the Forbidden Zone where he reveals to himself and us that this planet is Earth in a far flung future and that civilisation as Heston hoped to be reconnected with has long been buried. He pounds the sand as the Statue of Liberty signals up while his heart tumbles deep deep down. This is Heston’s hell, his reward for being a pioneer of the new frontier. And he’s stuck in it, an outsider, alone, forever.

But take pause to consider the apes. For generations they’ve only known one way of life. And now that cradle of their civilisation is shattered. Their very ordered way of life has been turned upside by a truth hidden from them and one they were happier and more functional not knowing. Things can never be the same for them and just because they are hirsute does not mean they won’t feel this greatly.

Heston would take a few years off from destroying societies but he would return in THE OMEGA MAN where he is instrumental in the downfall of humanity. This loose adaptation of Richard Matheson’s I AM LEGEND novel changes the downfall of society from a bacterial infection to instead be a result of chemical warfare. This way, it is man orchestrating the demise themselves. Heston plays Robert Neville, a Colonel in the Army and as such someone connected to this terrible event. When he gets infected he experiments on himself and stumbles across a vaccine, though too late to save the millions of people turning into albino Luddite nocturnal freaks who will all soon rally against the lonesome Neville who comes to represent the old ways they loathe so much.

Neville spends his days wandering his city and hunting this new breed of person, called The Family. He has become the monster and it isn’t as if he can turn the tide and kill them all, and even if he did he’d be left all alone, so Neville is firmly planted in a futile situation. Until a woman arrives and they fall in love. Because of course you have time for love if it’s Heston you stumble upon.

Through a series of stubborn events, Neville gets Lisa’s brother murdered, and her infected, and he still won’t play nice and so he ends the movie slumped dead in a fountain with a spear through his side. As a hero, this is a pretty bad run of events and so should instantly be clear that Neville is not any kind of hero in this story. Not one bit. And so he gets no happy ending. There might be a happy ending for some of the other characters but Neville most certainly is buried because of his own actions, and he no doubt keeps a rift between the very few human survivors and The Family because of his actions born of frustration, fear, and closed-mindedness. He is the epitome of male stupidity and pride and it is his ultimate downfall. And a shame he insists on dragging others down with him.

There is no happy ending for THE OMEGA MAN and two years later Heston would make SOYLENT GREEN, a flick renowned for its horribly downbeat ending. Because in a film where people are being euthanized and food shortages are a common problem, there are always ways for Heston to make it all worse. 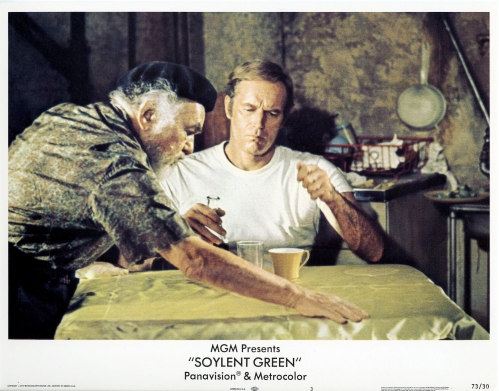 The people of Earth face many problems but one isn’t what to eat, because Soylent Green is available and it’s got all the protein you need. Because of special plankton being farmed and turned into a wafer that’ll keep your system running. Though there isn’t much worth going more than a mild trot for. Society is fractured, only the 1% have anything of luxury – and those luxuries are things you and I take well for granted right now. Luxury is only convenience finessed up due to context of rareness. The world is a sad and small and oppressively hot place and Heston’s Detective Frank Thorn wants to do right. He’s investigating a murder and that rabbit hole leads him to a ghastly truth.

It’s also as bleak as a week old corpse left to turn before becoming our next wafer of protein.

Y’see, what’s going to actually happen next? The only two ways my brain goes is to reckon either Heston’s public declaration gets Soylent Green production stopped, robbing society of the only real affordable and functional food source they have and driving a new societal collapse, and probably one where people turn to straight cannibalism once they realise what was happening all along. In for a penny, in for a pound of flesh, and all that.

Or maybe Heston changes nothing except for that he’s opened our eyes and we can’t just stay in our blissful ignorance of human body noshing. Every time someone cracks a wafer into their mouth they have to ‘know’ what they are doing. And that hardly seems fair.

Though I suppose they could just toss Heston straight into the production line and hope no one else believes the bleeding crackpot in the streets. This narrows the scope of the noir ending but it also highlights that no matter how you take it, SOYLENT GREEN, like THE OMEGA MAN and PLANET OF THE APES before it, all portray tales where Heston is around to watch the downfall of man, and the end of his own natural life, and if we wait long enough these sucker punches could be ripped from our headlines so we’re looking through a lens at the brick barrier we are all speeding into. Hrmm.