Noir isn’t about the bleak ending, it’s about every single direct step to that final crash onto your knees. 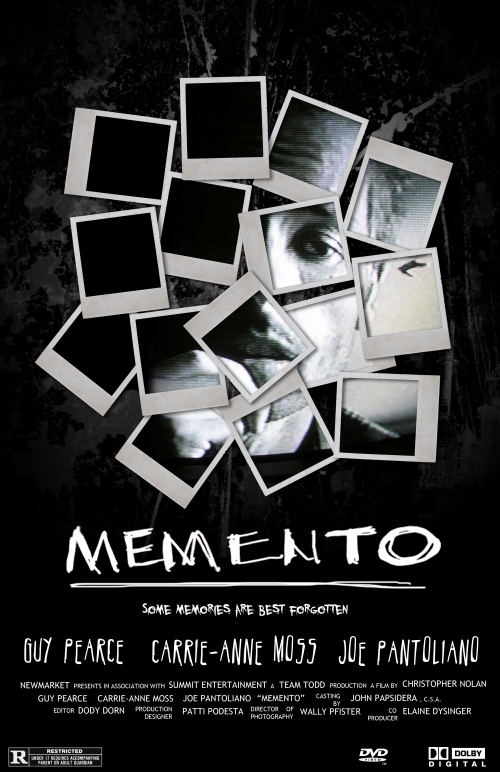 So MEMENTO, from Christopher Nolan, took that concept up a level by giving you that final fall straight up, it’s the very start, but you don’t quite get it, and you certainly don’t feel it, so then you get the journey in reverse and everything slowly clicks into place and it breaks you up in different ways because it makes you confused and uncertain and it really puts you into the mind of our lead, Leonard, played with noir lead aplomb by Guy Pearce. Y’see, Leonard has a memory problem where he doesn’t hold new memories very well, hell, he even struggles to hold a train of thought for very long, and it’s just brutal to watch at times.

With this major flaw, this perfect noir flaw, Leonard sets out to track down one of the attackers who murdered his wife and we are given the case in small snippets in reverse order so we never know what came before, the same way Leonard doesn’t in each scene. It’s a bold way to fracture a narrative and in this case it works to enhance the art and the dread because told straight up this would be a great crime flick but in the manner in which Nolan delivers this we get nothing short of a masterpiece.

It is with every step taken forward, which is actually a linear step backwards, we discover a sliver more and then have to quickly cross-reference all new points of interest against everything we’ve seen thus far so as to retroactively build a new narrative on the fly for the entire flick. By the end of it, we are exhausted and as the final pieces slide into place everything becomes clear in one long moment of despair and there’s nothing we can do. Instead of watching Leonard get dragged down for 113 minutes, we stow 112 minutes of information and then run it into a tight spiral all in the final moments and the shotgun blast of noir catches us in the chest and throws us to the ground.

The result was me sitting back after first seeing it and needing to discuss it. Thankfully, I watched it with some mates at university and we spent the next few hours debating the flick until the middle of the night. Because this is the intricate nature of Christopher Nolan’s mind when he’s at peak. You can’t shake loose of him.

Now I won’t even spoil the intricacies of the story because it’s one of those things you really need to discover and feel and it’s also something you conceivably haven’t seen so I will tread lightly. Suffice to say, this flick is dark and the more that comes to light the darker it all gets. Pearce is suitably baffled and determined and certainly hard done by. He’s a guy acting certainly about things he can never truly be certain about. There’s no other story that would so readily have him as a noir.

Whereas Carrie Anne Moss’ Natalie steals the show in one sequence where she plays damsel and femme like sides of a coin and it’s chilling and is also the moment the ball drops into the inky depths and you know you will never hear it hit bottom.

From this introduction to the world, Nolan showed himself as a mastermind of cinema. A thinking man’s creator who is interested in small things and how they fit together and you can’t help but be invested every single damn time. I find myself again and again drawn into the works of Nolan purely because I want to see how these people react in the face of these terrible things, I want to know why they choose each step. And this is something Nolan has looked at, in variations, over his career.

THE PRESTIGE is a great example of noir as being representative of a human theme. Determination is the sort of thing that if staunchly stood by can lead you down the darkest of alleys. As you watch two magicians duel over years, and each of them die a little for their craft, it’s hard to imagine either of them ever getting a happy ending because that isn’t even what they are chasing. They are after something so ethereal that they’ll likely never achieve it and yet in that hunt they remain locked through sheer determination.

The final hook turns of THE PRESTIGE are also masterful and also things I will not spoil here because they are experiences in themselves, especially through the way Nolan reveals, and conceals, them. But mostly it is because these paths are very consciously chosen by both characters, and they continue to stay the path despite a series of disastrous results and that is the key to personal downfall.

Whereas that subtle end of INCEPTION where Leonardo DiCaprio’s spinner just keeps on turning is the sort of thing that hints at possible noir, he’s certainly built up to that moment to fall forever into the abyss, but the final sound cues mostly preclude that ambiguity if you really think about it. He’s a flawed man, and one also driven by lengths of determination but it would appear he is allowed to exhale in that final moment.

And as Nolan continues to experiment with film stock and style, with endings dark and neat, and as he gets better in so many ways, I’ll always be drawn back to that perfectly simple and dark ending, the one he thought to put right at the start.