The idea of ‘breaking bad’ is to really embrace and fuel your own noir narrative. You are choosing to do the wrong thing, you are delusional, and it’s just always going to travel in one direction.

I mean, no one expected Walter White to come out of this rich, in remission, and happy, did they? 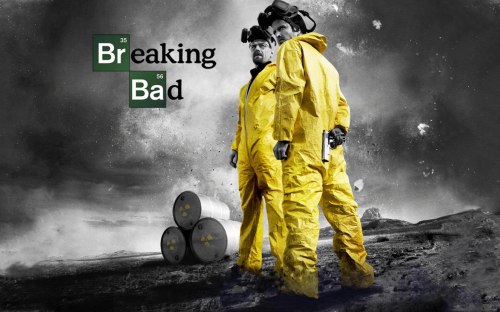 I like the ambition of this show to take someone so milquetoast and make them a noir lead because it really comes down to the core of the fact that all people have the propensity to be the bad guy – some hidden, some just restrained – and we can all end up in situations where this is what we see as our best, and sometimes even only, choice.

It’s very reminiscent of the Joker’s concept in THE KILLING JOKE [a brutal Batman novella by Brian Bolland and Alan Moore – that despite being a classic has not actually aged well at all with its rape and nastiness] and in it the grinning villain believes anyone is just one bad day away from cracking. From breaking bad. And so he sets out to do this to the best man he knows, Jim Gordon [incidentally, a character Bryan Cranston would voice in the BATMAN: YEAR ONE cartoon adaptation].

Walter White’s villain is cancer. And an indescribably average life. From this dull warm ember, Walter rises like a dark phoenix to become something horribly monstrous. because any villain is just a confluence of unfortunate events and a handful of poorly judged choices. And they so rarely set out to become a villain. The good villains, the really flawed things, set out on their downward path with good intentions.

Watching Walter slowly push himself further and further was always the clickbait for your eyes. Every season, every week, he pushed his own boundaries. And more galling, he found reason to push his own boundaries. But the man we know at the start, sullen, moustached, walking wallpaper, slowly steps into the darkness. He attacks. Then he kills. Then he slaughters. It’s a study in the progression of noir, what pushes you into it, and what pulls you into it from the other side.

As Walter grows in drug making stature, the legend of his prowess spreads but so does the fear of him. He transmogrifies into a genuine drug lord and soon there is nothing he won’t do. There is no scene of human horror he won’t orchestrate to serve himself.

And that’s exactly what he’s doing.

Initially, the whole reason to break bad is to provide for his family – a pregnant wife and disabled son. But after a while, you know he’s done enough and yet he’s always finding reason to do more. It’s fascinating, but it’s sad. And it’s so very real. Especially when, at the end of the whole mess, Walter admits to his wife, Skyler, that he stuck at it because he was good at it.

He was pushed into it by perceived necessity but then he was pulled into it by the sense of self-esteem he took from it. The wallpaper was finally seen, and appreciated, and he could not go back to being so dull. All of it was sidelined because of his fear that he had prolonged his life and the reality was he had prolonged the life he had lived previously. A life barely worth living. A noir paradox.

And so Walter marches into the final spiral curve, ready for what is to come, and in his final moments, as he dies, he smiles. He smiles because it’s better to die on your feet than live on your knees. To try and steal another Batman line and then horribly paraphrase/adapt it [this from the brilliant Nolan adaptation THE DARK KNIGHT], it’s better to die feeling like a hero than to live long enough to have everyone make you feel like the villain.

Because Walter knows he’s the villain, that’s fact, but he doesn’t have to feel like it. He doesn’t need to see it reflected at him where from the inside he still held some pride for what he did and how he did it. He still feels most of those steps down were the right ones to make, or at least the best ones. They gave him some months of good times instead of years marking time.

Then the beautiful thing about the show becomes Jesse Pinkman, in a career making role from Aaron Paul that is going to be insanely difficult to top because he is so supremely good in it. Pinkman is a junkie, a fool, but almost a savant at making drugs which means he’s malleable for Walter’s needs. Both chemically and socially.

Pinkman just shouldn’t care, he shouldn’t be noir because he’s already fallen, he’s already living his unhappily ever after. He gets high, he gets paranoid, he gets mouth favours from unsavoury ladies in the night and none of it comes anywhere close to fulfilling him. He should be the opposite kind of wallpaper to Walter, he’s the dirty, greasy stuff you don’t lean on, the gross surface you know can only be torn down, it’s the only way.

And yet Pinkman refuses to be stripped and tossed aside. He refuses to lie down. At first, he’s a pushover, Walter has it over him, and through this he’s bullied into some stupid places and decisions. But they’re nothing worse than the way he was already living so it doesn’t matter, right?

Wrong. Because while we watched, and fawned over, Walter’s transformation through the spiral, we neglected to fully realise that we were witnessing the opposite of noir: redemption.

Jesse Pinkman slowly starts making more moral choices despite the fact the world is giving him every opportunity to also break bad. Or break worse. He is put in danger, he still takes drugs, the new love of his life dies, he is beaten, and the hits just keep on coming. His life is made so terribly unmanageable once he falls in league with Walter and yet he never yields. Perhaps seeing one fall makes him want to rise up. Perhaps he knows where Walter’s journey ends and he doesn’t want to join him.

Finally, he is held hostage, brutalised, and forced into slavery. But even this doesn’t break him. By the end, he has become mentally strong. He has become unbreakable. His body might be making meth in the worst conditions for what might feel eternity but his mind is free, he imagines he’s crafting a fine wooden relic, something to be proud of. He has the mental strategies to survive.

In the final moments, after all that has transpired, so much bad, you’d not forgive him taking this out on Walter, you’d understand him lashing out and making the wrong choice for what might feel like the right reasons. But he doesn’t. He is not going to slide down.

Jesse Pinkman ends the show free, and he uses his freedom to drive off into the distance, his future preserved, his soul purified. Beyond us or society or anyone else, to himself he is redeemed and that sense of true worth is all that really matters. That we know we are right, no excuses, is the litmus test of the soul.

BREAKING BAD is that rare study of noir that perfectly showcases, in excruciating and slow detail, how the spiral works, and also how to escape the pit and ride valiant into the light.