This flick only gets better with age, and you appreciate that vintage also the older you are. As such, I want to ensure we time it just right that CHINATOWN is the last flick I watch right before I die. 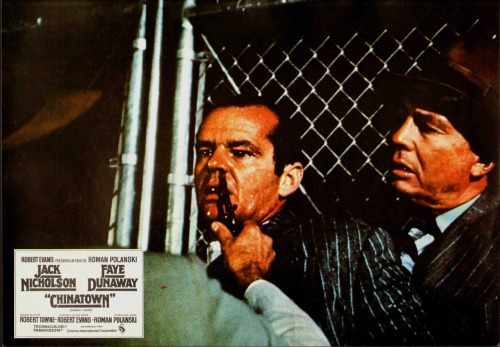 A bunch of the 70s cinema new wave casting their hands over the old gumshoe trope was always going to be something interesting but no one could imagine how masterful they’d get with so many of the old toys.

Robert Towne wrote a script about a P.I. caught up in intrigue and sinister people involved in shady water dealings. From there, a tale unravels where the ugly beauty of the downfall is that it’s a noir for us all. It’s a real world spiral. Because the narrative should have us following the intrigue, the political mess, and Jack Nicholson’s Jake Gittes certainly does. But that’s not the problem. That’s not the problem at all.

The problem is that people are worse than you ever expect them to be, even the nice ones, and especially the bad ones. The bad ones become something nearly demonic. Roman Polanski touches upon this in ROSEMARY’S BABY where a husband sells his wife and unborn child to the devil and it’s all very theatrical and weird but here, in CHINATOWN, it still feels real. Hell, it could be ripped from today’s headlines quite easily if you know where you are looking.

And when bastard fiction starts to appear under our newspaper masthead then you know we’re all digging deep down.

Once this story moves past the water, we get to the incest. And it blindsides you, because it shouldn’t happen that way, but that’s sadly exactly how it happens. The real world doesn’t lay neat clues, and it doesn’t just do one bad thing and stick to it. The worst of us are Lernean hydras and we lash out indiscriminately, tearing flesh and spraying venom in glorious hi-def 360 leaving no one unscathed.

Jake Gittes thought he lived in a bad world, but one with rules, and by the movie’s end, he’s completely broken because not only are things worse, well, they’re also completely unmanageable, and he’s being told to just accept it. Because it is easier to not think about it, or to walk away. If you die on every sour headline or problematic retweet then your empathy is going to bury you early and hard. You need to armour up. You cannot be completely empathic because the world is an emotional vampire and you will be left as a husk of a human.

This is what stares Gittes in the face as he watches Faye Dunaway’s Evelyn Mulwray keep on down the street, despite being slumped, probably dead, and definitely about to go unavenged for her trials.

CHINATOWN perfectly encapsulates the fact we all live in a noir globe, and we are slowly spinning down and down and around and around and we simply ride it out because what other choice do we have?