My next one-shot comic is a spacesuit noir revenge tale with Alex Cormack called STAIN THE SEAS SCARLET and it’s coming to Kickstarter next week, for the whole of November.

I’m in love with this book and I want you to fall in love, too, so here’s a little meet and greet for you to get to know everyone and everything about it:

Hot on the heels of his titanic launching of indie runaway success SINK with writer John Lees at ComixTribe, we steal Alex away for one issue and he brings everything to these pages. His inks were phenomenal, and then he coloured himself and made some insanely great choices. This book looks this good because he’s an artist worth knowing, following, and falling in love with.

Here’s a panel of our spacesuited lead using a gravity well around her fist to draw in nefarious nanoblobs to use them against her attackers.

The brains behind the analytical masterpieces StripPanelNaked and PanelXPanel can also letter. The amount of intellect he’s brought to this comic is amazing and everything is 1000x better because of his inclusion in the book.

Our lead character, and she’s a bruiser. Her planet is being terraformed by invading android weirdo armies and she’s fought the good fight and now is making one last Hail Mary play.

I’ve loved writing Yelena and I think a lot of people are going to love her after they read this issue. 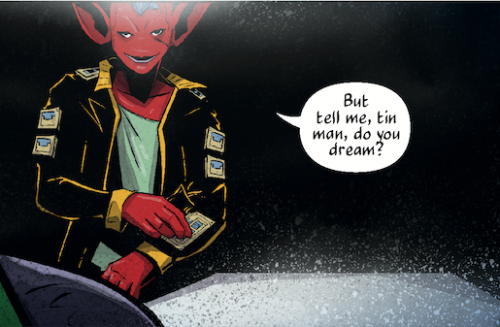 Our story’s villain, or, the lead villain representing a villainous regime. It’s hard to pin down exactly what Plath is – robot, techno-organic 80s video nasty, fleshy intergalactic Cronenberg nightmare – so it’s better to judge Plath by actions, not words. And Plath is nasty, just soullessly nasty. The kind of soulless nasty we need to defeat in the world in 2017.

And that’s really all you need to know. I could tell you more about Yelena’s planet, but it’s pretty well fubar. I could explain how Yelena’s sister figures into this, but I’d rather that be a surprise. And I won’t recount what the robot army are like as a whole because if Plath is their leader then you know something’s rotting in Intergalactic Denmark.

Though it might be sensible to introduce myself, I suppose.

I’m a writer. This is my sixth Kickstarter campaign. I’ve written for Dark Horse, Black Mask, Vertigo, IDW, ComixTribe, and my own imprint which this comic will be on – Four Colour Ray Gun.

I hope you like all the ingredients that have gone into this book and we’ll see you next week when we launch, and launch strong.

2 Comments to “STAIN THE SEAS SCARLET – Meet and Greet”