Precis. I’m about to embark on a reread of THE WALKING DEAD.

Why? Because this comic was my return to comics. I grew up reading whatever comics my big bro had around. Then I dropped off during university years, due to money and access. I started teaching, and focused hard on the job, but then a few years in the same big bro bought me THE WALKING DEAD Vol. 1 because we’re a huge zombie family and he’d heard good things.

Hooboy, did I fall in love. I got the next 2-4 volumes online asap, devoured them all, and would even reread them as each new volume came out from then on – a practice that lasted maybe 10 volumes deep. I then held on for about 22 volumes in total, from memory, then dropped off for some stupid reason along the way.

But now I’m back because I wanna reread those 22 so I can slowly chew through the remaining volumes until I hit the finale, which is somewhere in the 30s, I think. I’m excited about this because I dug the book, I’m keen to see how it ends, but I also remember loving these opening volumes and storylines so so much. I wanna see how they hold up, and if they transport me back to those days a little, too.

As such, I’ll slowly chip away at these, time permitting, there’s no hard schedule, but I thought I could jot down some thoughts and do it just for my own process brain food to unpack the story and what I can take away from it now.

I still really dig this comic. That’s a good feeling. It’s still got that comfort food feeling to it, yay. 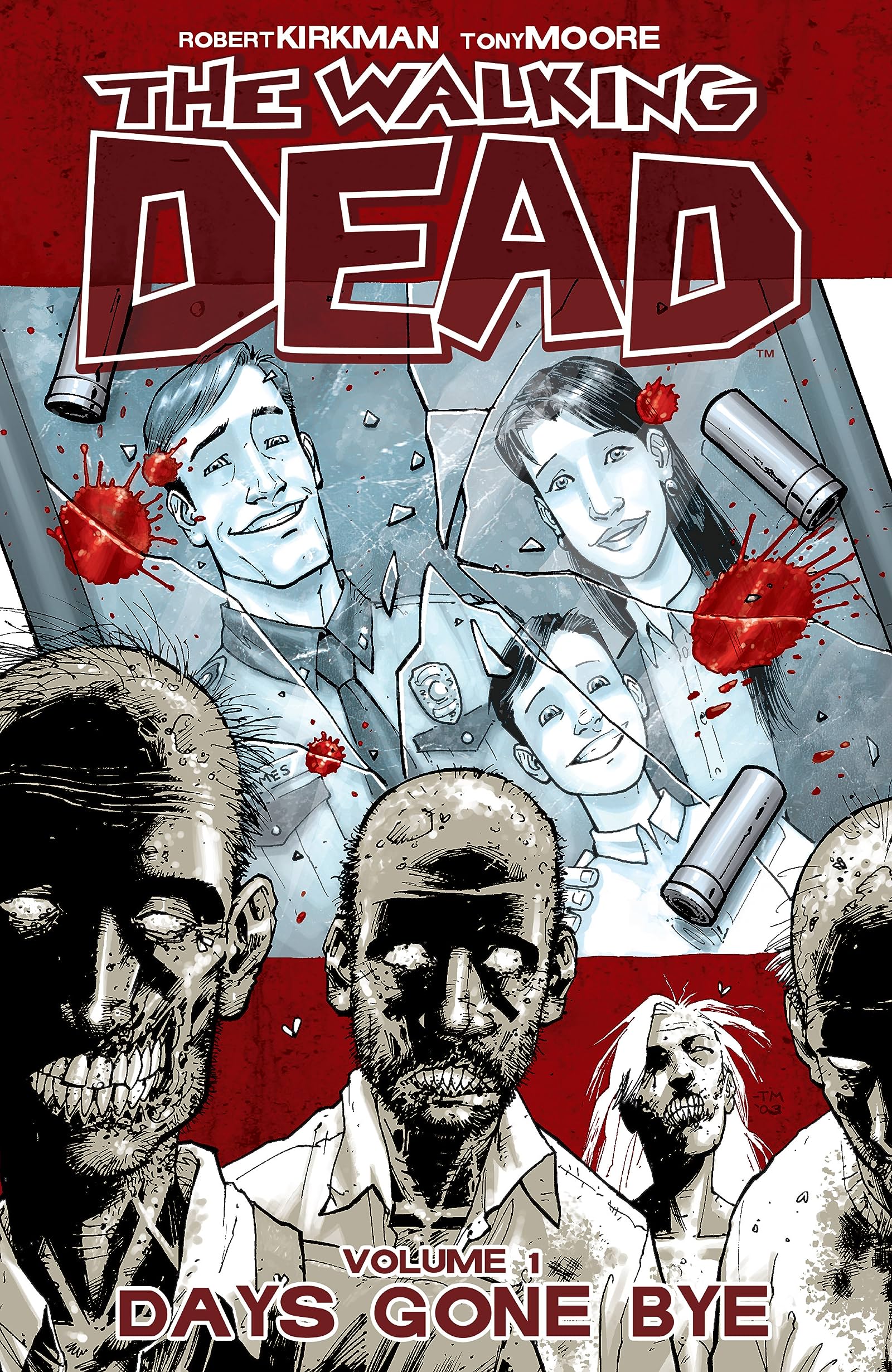 The first issue is just Rick. Just all Rick, all the time. We meet him, follow him, centre him in the response. For such an ensemble comic, that’s an interesting way to start. We follow him out of the hospital, through some danger, and out onto the road. In fact, it’s even fairly slow and quiet. Just pages of Rick existing, walking, looking around. I feel like this is all to make us invested in Rick as our lead, and I think it does that job. I mean, I’m not “in love” with him here, but I remember as the series wore on I definitely found him fascinating [even with his flaws – hrmm, Rick Grimes has that same broken man charm that Matt Murdock does…this is something to consider moving forward]. We see him get emotional at times, he cries maybe 3 times in this trade, and I like that. A lot. There’s always been something emotional about Rick’s journey, and his mental health along the way in the future, so to see it set up here that he isn’t the hardened cop is a breath of fresh air. In fact, the hardened cop is pretty much Shane, larger, squarer jaw, and he’s fairly toxic in the way he thinks he can control Lori, but it’s really just a manifestation of his own emotional bullshit that he can’t process properly at all. But more on that later.

Sidebar: I hate that there are no covers in these trades, so I cannot tell where the issue breaks are. A small pet peeve, and I assume Kirkman loves this as just one long run/soap, but I wanna know where the damn issue breaks are. Especially if I’m trying to pin point where events happen, or how sequences play out.

Lori. Where to start? She’s gotta assume her husband’s dead, then she’s reunited with him, and the elation that must bring would be through the roof. And still, she’s assigned the role of Resident Shrew, the fun police to her police husband, exceptionally quickly. We don’t get her point of view too often, and actions reinforce Rick’s ideas, so she really comes across as almost an adversary to Rick and his path forward.

It’s interesting to then note that Kirkman had initially planned for Rick and Lori to divorce later on, something I assume she wouldn’t have come out of looking very good. She’s a silent shrew, a combatant to his ideas, AND she cheated on him. So far as quality female characters in the book go, it’s her, the other unpleasant housewife Donna, the timid Carol with little airtime, and the sisters who don’t get much to do just yet. And, to be fair, that puts them against Rick, Shane is well put together as this dark heroic figure who is broken, Glenn gets a fair amount of action, and Dale feels a little more integral to thinks than Donna or Carol. Jim, the silent mechanic is more of a background elemental plot wave, and the other husband…bearded guy, well I can’t remember his name, so I’m gonna say he’s a wash. Even 7yo Carl is an idiot and yet still saves the day, twice. There are thin guy characters, too, but there are also guy heroes, and yet the female side of the cast gets…not very much. At least, at this stage.

When Rick meets Glenn in Atlanta, Glenn treats Rick like he’s new to it all and so explains everything to him, even though as default you’d have to assume anyone you met was just another traveller in this world. It’s a few pages before he asks where Rick has been, whereupon Rick confesses his very very unique situation. A small bugbear to focus on, but it stood out to me on this read – but never on the previous dozens of reads, so ymmv.

Rick takes a horse from a barn, admittedly, where it would probably die, and he rides it into Atlanta, which works for him, and then he instantly abandons it when zombies attack and the horse gets absolutely annihilated. This is some great foreshadowing for Rick’s ability as a protector moving forward, but also in how he uses others. He brings them into the fold, they can help him, and then he leads them to their demise.

You get a lot of cool takes on Kirkman’s personal take on zombies. Their speed, their need of blunt force trauma to the head, their intellect, these are all fairly standard. The fact they spread fatal disease in their scratches and bites, and they they on even when incapacitated. That Rick wouldn’t eat a deer a zombie had been munching on. The whole “cover yourself in zombie guts and they won’t smell you so they won’t attack” schtick is interesting, though I can’t help it isn’t something that’ll become an overall “canon” outside of this book, it’s a touch goofy. There’s some “zombie world-building” done deftly throughout these 6 issues, and it leaves a lot of room for the soap that expands between all the people of the RV crew. There’s time for judgemental tut-tutting, and talk of washing powder, and it all sets up the idea this is a story about the survivors, not just survival.

Tony Moore really was a stellar start to this comic. A pity the contract/rights blew up between them, as that’ll no doubt leave a sour taste in the mouths of many. I didn’t remember Moore doing so many 9 panel grids as he does, and while his gore and zombies are great, sometimes it’s his quiet panels that truly stick with you after the book closes.

I was impressed that Moore does this thing where Shane eventually loses the detail in his eyes, he looks like the white triangles Batman has, and it coincides with Shane’s emotional state as the story progresses. But then there’s one panel towards the end where Shane really pops off and his eye becomes a perfect circle and it’s so jarring. I love Moore’s faces more than anything, usually. So much character on display.

That beef brewing between Rick and Shane is forced up out of nowhere, though, isn’t it? Dale mentions something well away from being asked, and Shane lets his shit boil over and show really damn quickly. Rereading this, I see the show did a better job with dragging it out to really twist the knife in every gut it could. Here, we go from Shane his friend, to Shane happy he’s back, to Shane brooding, to Shane going absolutely bananas at Rick constantly in about 3 issues.

But the speed with which Shane froths up works because of how quickly it’s also put to bed. Having Carl kill him is a hell of a hook for the end of a first volume. That’s a bold statement, and one I think has hooked hundreds of thousands of readers by this point. It’s a great scene, well set up for Carl to have the gun, and you know it’s great drama set up for what comes directly after it…once you buy the next volume. So as a strategic choice, not to bury the lede, it was the right thing to do.

It was such a joy to sit in the winter sun and devour this first volume. Hopefully I can carve out time soon to reconnect with the RV crew and see how they deal with the death of Shane. If anyone else wants to reread along with me, I’d love to hear your scattershot thoughts about this volume, so feel free to drop me a comment below. And if you don’t have a copy, hit up your LCS, or a local library, they’ll help you out.

Until then, good night, and good luck.

Note: this was originally posted on my Patreon, as a public post. If you wish to follow me there, or support my writing, it is greatly appreciated, though not necessary.