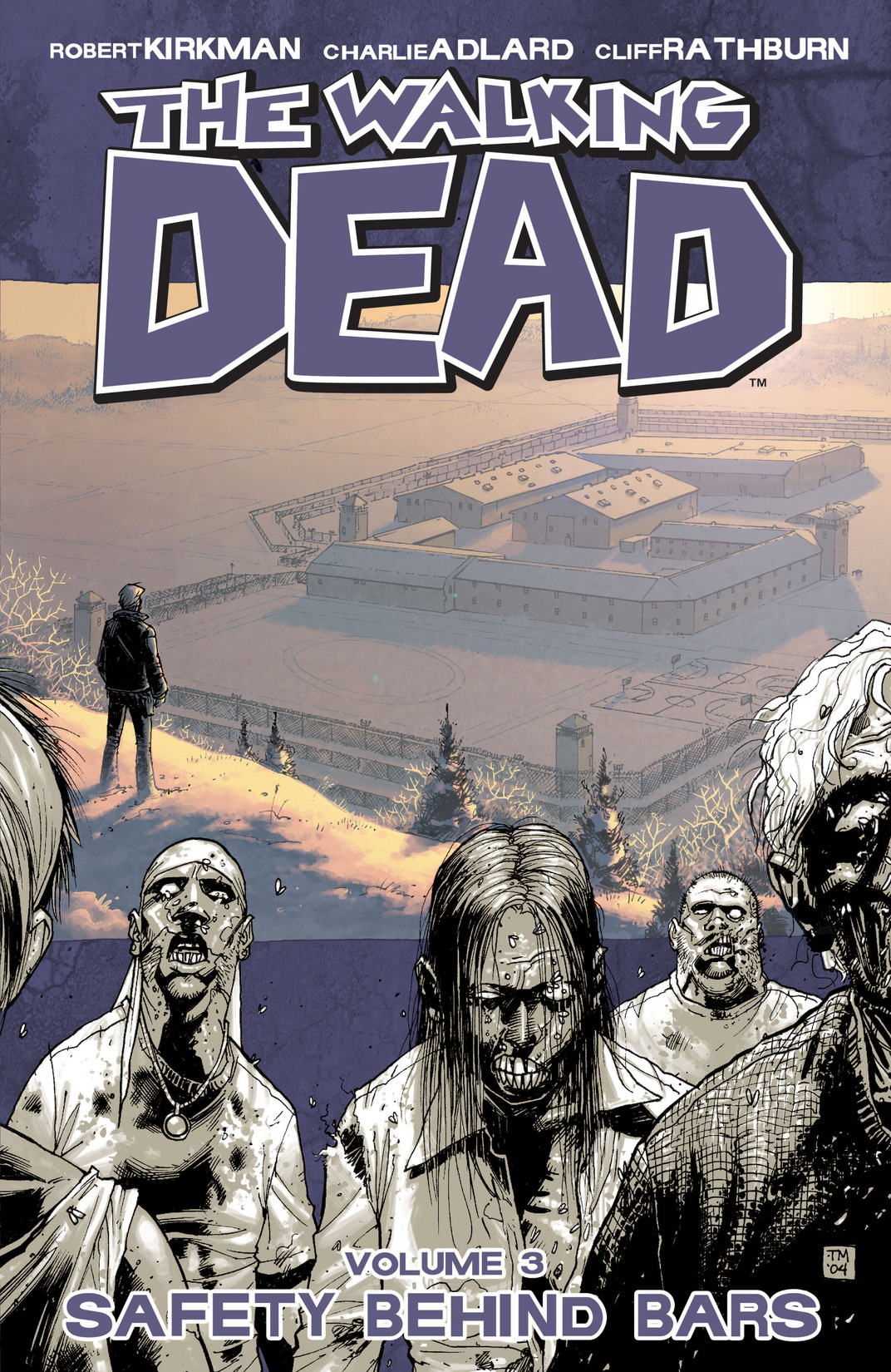 This volume sees everyone settling into the prison, and it’s the volume where the book really finds its “new life as we know it” vibe. The group has ambled about, they’d struggled through locations, and now they hunker down.

The first issue of the volume is very much just the group going through the motions. They’re logistically dividing the prison up, working out how to clear the dead. It’s a civil planning meeting set to zombies, with a little interpersonal drama sprinkled on the side. I’ll be honest, the issue feels a little…not boring, just simple and solid, right up until the final splash reveal – there are 4 prisoners surviving in the cafeteria hall.

It’s a pretty great twist to things, and the flow of the mundane life-chores leading up to it seems like a genius pacing plan in retrospect.

Rick asking if the people are guards is an honest laugh out loud moment. They certainly don’t look like guards, but he’s still seeing things with his old lenses on.

It’s sad to see Lori really only getting to play the role of emotional pregnant woman. She still continually goes up against Rick as the face of alarmed reason while he assumes his divine right to be the leader. As the volume wears on, he doesn’t do right by her on many occasions. I’m sad to see Lori sidelined on the whole, but I will step for the portrayal of Rick as a deeply flawed person. He’s making huge mistakes all over this volume, and his character arc and deconstruction as the analysis of the over-confident middle aged white guy, and the damage even that brings to himself, is definitely worth delving deeper into.

Rick takes the role of leader, because people look to him with his square jaw and his police jacket and hat of authority as the person best equipped to walk them through this hell. And he does have a lot of good qualities, but I think it shows he needs to be tempered with others. No one person should shoulder the weight of the apocalypse, not for any number of people. Rick could see Tyreese as a partner in this, but it feels like he treats him as a highly competent 2iC. It should be Lori that Rick shares this with, his active queen in the royal court, but he’s too busy telling her to stay out of his affairs and just let him fly by the seat of his pants unrestricted.

Glenn and Maggie continue their relationship, which is a mostly zombie-free affair. They sneak off, they cut their hair, and then Maggie begins her breakdown [which I just this second remembered where it was heading, which makes me sad]. Nothing pure in this world can last, but at least they get some time.

Tyreese sees his daughter killed by her partner who thought they could double-suicide out after losing their virginities. It’s hard to see her death as anything other than motivation for drama for her father. We’re not left to mourn her so much as fear the psychosis it puts Tyreese into. It builds to a great set up where Tyreese is left inside the gymnasium, surrounded by zombies, and you know he’s gonna die, to then later him being retrieved out of there and we see he survived. Thanks to the death of his daughter [whose name still escapes me], he can crush the skulls of a basketball court’s worth of zombies and keep on smiling.

I was almost thinking, “To be fair, no one was left mourning the death of Tyresse’s daughter’s creepy boyfriend,” but then I realised, no, we’re left to absolutely loathe him. He gets an emotional response, she does not.

Herschel finding his girls decapitated is a strong reveal, though chalk them up as yet another in the list of female victims I barely know, but whose deaths greatly affect the men they’ve left behind. We, the readers, are left to wonder who the killer is, even though the killer has been presented in the most creepy of fashions previously.

Flipping through this, the drama comes thick and fast while the zombies barely rate a mention. Those that appear are crushed by Tyreese, or easily navigated on bike by Shane as he checks on Shane’s corpse, so we’re left with Hershell mourning, his daughters’ head reanimating and needing to be shot – a no doubt doubly crushing blow for Hershell who previously looked after each zombie in case a cure could bring them back. We get Axel perving on two of the ladies in the shower block. The group locks up their best suspect in the decapitations, and then Carol kisses Lori. It’s a weird moment to cap a series of little moments.

But, I’ll be honest, I think it’s a cool choice for the narrative. Kirkman does do a good job, sometimes, of showing how characters/people react under incredible pressure and stress. People are erratic, they’re wild, and strange things go down. The kiss does just that, it builds more interpersonal drama through small but strange interactions. The next page is Andrea expressing her commitment to Dale while they lie in bed. These are all good little moments that lie underneath the larger plot, but for the moment there is little by the way of large plot.

They’re in a prison; someone just took off the heads of two little girls. That’s the plot, the rest is all just real life, but in that new set up.

Rick unlocking Dexter’s cell door, Dexter fronting up to Rick, and Rick not backing down is a big character moment for Rick, but also for Dexter. We see so much of Dexter in how he steps down from it, and holds himself high. He’s an interesting guy. It’s like he sees these people for the batshit characters we know them as on the page.

Old mate serial killer does kind of come out of nowhere, he’s more force of modern nature than actually fleshed out character, but he certainly serves to shake things up. He’s the big plot item, and as a cause for change and alarm he works really well.

Some of the B-Roll characters trying to sort out the problem of zombies overcrowding at the fences is a fascinating look into the new minutiae your life would consist of in this world. You’d be wondering how to stab them into the head and retain your blade at all times. It’s not big plot stuff, but it makes the world, and those characters who get this spotlight, feel about 1000x more real.

The serial killer seems mostly like a plot point for us to see Rick really clench his fist as he declares, “You kill? You die!” Which is interesting because his son just killed someone two volumes prior. Rick steps up a lot, he’s firm a lot, but already here we see his hypocrisy settling in, and there’s plenty more to come.

They manage to milk a decent closing issue out of the serial killer as he’s sentenced to death, which makes a lot of people feel things, culminating in his making one last dash for killing someone before getting blasted by Maggie, which leaves more people with more feelings, and then once it’s all calm and settled Dexter steps forward with a new cache of weaponry and he’s telling everyone to get out of his house.

The Levitz Paradigm is definitely in play here because Dexter seeded this coup a while back. It’s great to see plot wind up into big moments, all flanked by group emotions, and just in time for the next big moment to wind up and create new rifts and emotions and such.

This volume is all about getting the group to settle down, and when they do we see the drama follows them anyway. They’re the magnet, and they are the catalyst. The soap opera elements are low key and absolutely face-smashing and it’s fascinating to see how far each interaction will go as it develops. By the end of this trade, I’m still totally all in on the story, and the characters are certainly getting more chances to shine and stand out.

—
This column originally appeared on my Patreon – the post is up for free, you can follow for free, too, or drop a coin in the well for me.
Advertisement