Short stories are awesome. Always have been.

I love short stories. There’s something so special about the kind of idea a writer gets that only needs a small amount of space/character/world to tell. It’s not a novel, not a tv series, not a huge reverberating narrative engine – it’s just a thing that desperately needs to be told.

The ultimate short story collection that springs to mind for me is NIGHT SHIFT by Stephen King. Mostly because I read it so young it became formative, but also because it’s so damn good. I feel like every damn story in it is amazing, they’re all certainly memorable, and looking over the track list…nine are still absolute bangers that I stand by. A few others are good, but fall just short of great. But the collection is evergreen in my mind for what I dig about short stories.

I got thinking about them recently because I saw Hard Case Crime are releasing a collection of Ray Bradbury’s crime short stories: 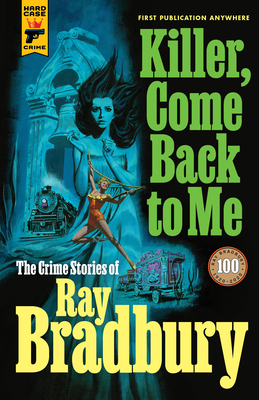 That cover is so exceptionally haunting and beautiful. Where compositon and colour just flat out open my wallet. I really really want this book in my life if I can ever track it down.

I’d love to write a short story collection. One day. I’ve gone on to devour and enjoy so many more shorts from King – I know it’s technically a novella, but HEARTS IN ATLANTIS remains one of the most beautiful and magical pieces of writing I’ve ever read. Just thinking about it again now puts a little butterfly in my stomach.

His son, Joe Hill, also writes some exceptional short fiction. His collection, 20th CENTURY GHOSTS, felt like his Night Shift, and it had some stand out pieces, none more so than THE CAPE, later adapted into a comic that’s one of the best comcis of the past 20 years.

Being a horror nerd, I loved THE BOOKS OF BLOOD by Clive Barker. I will stop anyone in conversation and tell them about the madness of IN THE HILLS, THE CITIES – a tale where neighbouring villages get their entire populations to physically link together and form writhing human Voltron forms that then fight. Every time I describe it, peoples’ eyes just widen. That’s the sign of a great short.

Ethan Coen wrote GATES OF EDEN, which is a weird set of vignettes that feel like they fell out of scripts he would have tried, and they certainly captivate. Naturally, the shorts of Philip K. Dick mean a lot to me. There’s THE DAYS OF PERKY PAT, which is so strange and haunting, and there’s one whose name escapes me but I know Alan Moore completely ripped it off for one of his Future Shock strips. Who would forget the TALES OF THE MOS EISLEY CANTINA, followed by other collections set in Jabba’s Palace, and I think one about just the bounty hunters…right?

A great slice of short fiction offers an earworm of an idea. A 20 page sample of something that opens the door, fires the gun into your chest, and leaves you gasping, sucking in blood, and feeling yourself die. Short fiction is where smart writers sometimes play their best ideas and themes that haven’t found a full story, and it’s like they don’t leave a morsel on their plate – every quality piece of brain fuel powers their engine forward. I’m in awe.

I have one idea I want to tell as a series of short stories, and I’ve written…a handful of them, but I’ve shelved it for time, at this stage. I’m also writing very short pieces on my Patreon, twice a month, and they’re just a blast to get out of my head. From weird romance to ghastly serial killers, and all the strangeness in between, I’m just flipping up balls and taking a swing. It’s only 300 words, usually more, but it lets me play with voice, to experiment with style, and I have about 17k of them so far. There’s a part of me that wonders if I could stitch together 20-something-thousand and put them into a book. Some of them rate as my very best writing, which is a weird place to leave my best work, but sometimes you never know just what’s going to come out. Some are maybe…not as good…or as we say, they can’t all be winners in a collection. But we try.

I don’t know what will come of them, but for now I’ll continue having fun writing them, perhaps you’d like to follow my Patreon, which you can do for free, and sometimes I put the 300 Flash Fic out as a free post. You might dig what you find.

Oh: also, this doesn’t even take into account comic shorts, of which I’ve done a few, and I love dearly. You can read some of my short comics on my site for free, and on my Patreon this week I’ll be posting some and their scripts for you to enjoy!

Follow along on my Patreon now for all the writing goodness!