Not only won’t Batman ever get a happy ending, but he most probably shouldn’t. 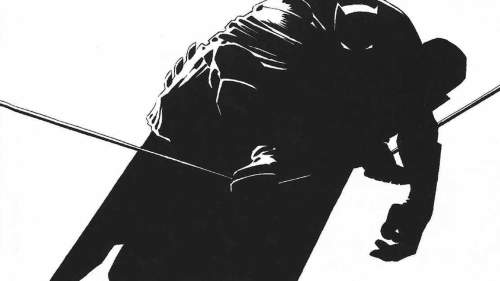 Besides the fact he’s Batman, he just doesn’t get to end up sitting by the beach sipping Mai Tais and getting tipsy. Though if he did you know he’d be shirtless, bare hairy chest out loud and proud, and the cowl still on.

That is not his final act, it simply can’t be based on pure inception of what he is and what he does. He’s fighting a war on crime. He’s fighting a war against the worst of the human spirit, something we have in ever growing droves. At what point would Batman ever feel like he’d won? Which case is big enough that when it ends so does he?

Batman will keep fighting until his cartilage is all gone, his knees have exploded. He’ll wear himself down to a broken nub and still be trying. There is no Bat Retirement Plan. There is only a slow drill into and below the batcave into your batgrave.

And, really, isn’t that what’s fascinating about Batman? And ultimately is freeing about him? Maybe he doesn’t always have to win. Maybe he won’t always win, but we know he’ll get back up, and sometimes win, until eventually he doesn’t.

Maybe the certainty of Batman’s bitter end isn’t in the how, or from whom, but really just the when. When would comics have the balls to truly can Batman, in the most wholistic and complete way, and make it stick? When do we see the final bell toll for this noir? Because every time we put it off we just dilute the whole story. Batman should be this longform noir where he slowly burns out in real time and then he eventually slumps over, dying the way he lived, exhausted and knowing it was coming.

This is a big part of what makes Frank Miller’s THE DARK KNIGHT RETURNS so fascinating. We open with Batman retired, or believing he can be. But then he gets pulled back in. Because of course he does. And right there we have his eternal problem. He’s always going to want to get back into the game, or at least feel like he must. There’s nothing that escapes his eye forever and so you know he’ll be back into the rib busting business as soon as he can muster, which is exactly what we see. An aged Batman fights against the tide of time and man and every step, every punch, it’s all his decision. It’s all his fault.

And by story’s end, Batman is in the grave. But even that’s not the end.

The more Batman you read and you start to believe that his noir cycle is one that will never end. That’s the worst part about it and him and what he does. If he was slaughtered tomorrow at least he’d get some rest. But to dance with the ouroboros for all time and never ever end, well, that’s just going to frustrate him and break him and tire him but he’ll never choose to step out of the way.

A shame he’s a comic character because the medium is driven by perpetual narrative conflict, there are no true resolutions ever and all Batman needs is even a false resolution but he’ll never get it. He’ll be fighting for generations and that is his true noir ending in perpetuity forever and ever, amen.

Behind the Panel Podcast 110 – feat. RKL

While at Oz Comic Con Sydney 2014, I was on the Behind the Panels podcast panel where we live recorded a podcast in front of a live audience. It was a fantastic experience. So, if you wanna hear me wax about comics, you should head here:

BEHIND THE PANELS 100 – feat. RKL – and we discuss BATMAN: YEAR ONE

It was an honour to get the invite up onto the stage, and it was such a pleasure to discuss BATMAN: YEAR ONE – I really love that book, like most of early Miller work, and Mazzucchelli art will always float my boat. We get into some depth while also tangenting frequently. Chatting with Richard Gray and David McVay is insanely easy. I am certain you’ll hear more from us in the future.

I hope you guys enjoy the pod, feel free to spread it round to your Bat and Miller friends.