Nothing like an end of year round up. A time to reflect, a time to take stock, and a time to project.
Overall, 2018 has felt like a year of building pressure. Whether we get a glorious wave into 2019, I don’t know, and whether I have the balance to ride that wave and not get crushed I also do not know. But I’ve done my best to stay positive and keep wheels behind the scenes moving, so while I didn’t publish a lot this year, I did prep 4 pitches, and put the scripts for one project to bed, and wrote a tonne on another one, and have lined up a few one-shots with artists I’m excited to bring it all together with.

And while I said I didn’t get much out in 2018, what did come out was stuff I’m crazy proud of. The BEAUTIFUL CANVAS tpb landed in Feb, collecting last year’s acclaimed mini-series, and the month before it we started the year strong with ETERNAL, and I’ve been saying if you only publish one new thing all year, but that thing is ETERNAL, then it’s been a good year. Eric Zawadzki and Dee Cunniffe deserve all the praise this year.

I really dug some good good stuff this year. Image tops the list with so much quality: GIDEON FALLS was something I got caught up on recently, and that book is very fine, as is CEMETERY BEACH, for totally different reasons. SHANGHAI RED was my jam in the same way SINK at ComixTribe is. PAPER GIRLS and SAGA and DEADLY CLASS continue to be masterpieces, and I really enjoyed MY HEROES HAVE ALWAYS BEEN JUNKIES, but the top book really has to go to something that’s one of my very favourites from my very favourite creative team:

KILL OR BE KILLED 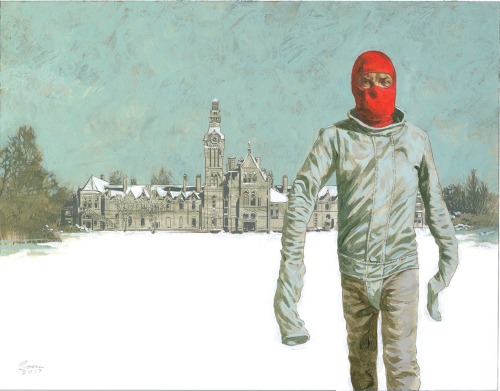 Just a stellar end to a wicked story where both Sean Phillips and Ed Brubaker were on superbly fine form.

Man, THE OUTSIDER from Stephen King could have run away with this, if I’d only stopped before the final hundred pages. It’s not *bad*, but it is not as blistering as the first half of the book. That first half is pound-for-pound King at his dark criminal best.

I also really dug PLATO WYNGARD AND THE ARMOUR OF THE GODS, the second novel from my two brothers, Marc and James Lindsay, but that feels a bit nepotistic, and would make them far too happy.

I took a few weeks to smash through HANGMAN, where Jack Heath writes such a ballistic crime novel that you can’t help but be impressed with the layers of familiarity he builds into his characters alongside the wild intricate puzzles and violent moments.

But there can only be one, so, I’ll lay this one at the feet of:

WE RIDE THE STORM 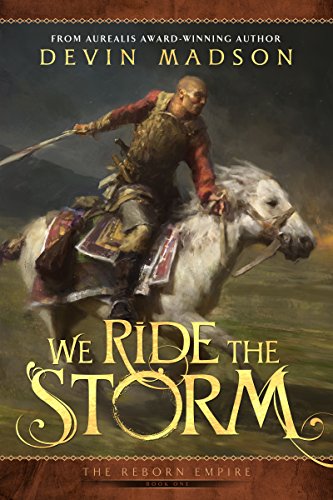 This fantasy epic from Devin Madson was something I bought because she showed the opening line on her table, and it’s a banger:

I honestly hadn’t read a fantasy book since my David Eddings days in high school, but I was keen to try this out. It’s Book One of a bigger story, so the opening hundred pages is a lot of table dressing, but by the final hundred pages it’s just fistfuls of food being slammed into your mouth faster than you can chew. And I mean that in a good way. The action and character drama continue to rise, and I was hooked on all three plot threads as they wind ever closer.

There were also two particular chapters where I finished them and thought…damn, that’s some good reading.

If you get the chance, track this down, it’s bloody, glorious, and bloody glorious.

THE GOOD PLACE came so so close to running away with this one. The third season has been just as good as the rest, and in a way that’s different from S2, which went about it different from S1. The show is a titanic force, and I’m a better writer for having watched it, but something else from this year jumped ahead of it through sheer force of will. And it wasn’t DAREDEVIL S3, or GLOW S2, or THE KOMINSKY METHOD S1 which came out of nowhere to absolutely thrill me, nor was it my marathon catch up of three seasons of THE LEFTOVERS, which I’m discounting because it’s an older show. No, the top gong is kinda easily held onto by this one which should be absolutely obvious when you really think about it:

This show good, this show real good. Some of these episodes, mostly in the middle in and around the Teddy Perkins ep are just A+ analyses of the modern world as told through gonzo noir small screen cinema. So so perfect.

MY TOP MOVIE OF THE YEAR

It’s one thing to announce a tie, and it’s another to give that tie to two polar opposite things. Both of these flicks did what they needed to do nigh perfectly, and they left me in very different places, and I can barely separate them. One will be endlessly rewatchable, one will be a hard watch again, though I will. One is high pop bubble gum joy, one is brutal art house insanity. Both, though, are long. I can’t separate it, so I’m letting the chips fall where they may – the top flick[s] of 2018 are:

Watching the Marvel Cinematic Universe come to this big break moment at the end of Infinity War was something to behold, a truly special feat. The movie is top notch event comic action fun. It’s *BIG* and it’s wild and it’s a smile injected into your lips. It’s not high art, and it shouldn’t be. It’s not a great character study, and it shouldn’t be because there are about 500 principal hero cast at play – though it is a study of Thanos, which is both as bold as it is brilliant, and it’s for that reason it crossed the line at the top.

However, across the aisle, SUSPIRIA does everything different, and is most likely the more true superior flick. It is high art, it’s weird, it’s a character study, or more of a location study, a look at witch hierarchy in dance schools. It’s unsettling, and everything holds huge gravity – which is funny when you consider the death count in Suspiria must be about 0.0000001% of the other cape-inclined movie. I feel like Suspiria is more likely to sit atop Best Of lists when we look back in 20 years, but Infinity War will be more remembered, and more wildly remembered, and will sit on its own Best Of lists, too, for its own reasons.

I’ve gone deep into WOW IN THE WORLD and STORY PIRATES with the kids on all commutes, and they’ve fed my brain in wonderfully small ways. SERIAL returned and was interesting, but lacked that central narrative engine that makes it a binge-worthy podcast. I also found it crazy depressing, to the point where it almost felt like it was inducing anxiety in me after listening for an ep, and maybe that’s a huge point: if listening to it all give me the shivers, imagine living it 😐

I’ve caught up on a tonne of the GOOGLE TEACHER TRIBE PODCAST just to keep my dayjob game tight, and it’s worked a treat, making me feel energised about all kinds of things for work, especially going into 2019.

But, I think this year goes again to OFF PANEL, the comic interview podcast where the creators are well picked and always get down to real talk. I still love this podcast, and still get a constant stream of quality inspiration and joy from it.

There was new Sarah Blasko this year, I got DEPTH OF FIELD and it’s a great writing record, but it lacks the punchy catchiness of her other albums, so I think sneaking in at the top might be the SUSPIRIA soundtrack. 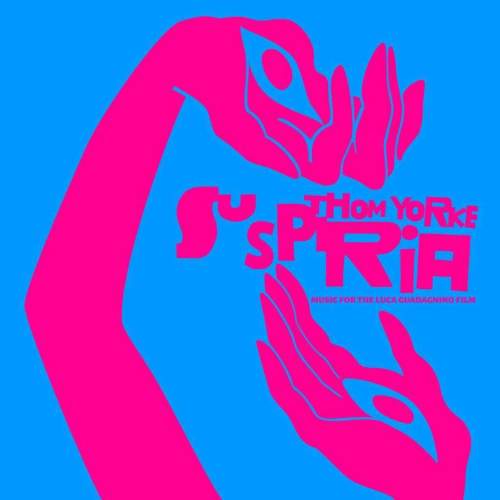 And I think that’s a wrap. 2018 had some good stuff, and it also felt like mental quicksand. But walking into 2019 will feel like walking free, so I better make the most of it.

Here’s to building a better stronger list of live in yet another year.