Is there anything more noir than the mad scientist?

The definition of hubris, they are nearly always their own downfall. And why? Drive, determination, a sense they should and can do good but eventually the world won’t let them. Physics won’t let them. And they know this. Because they are smart, but they push on anyways.

Maybe mad scientists are driven by hope. By faith. Natural breaking points of the scientific mind. 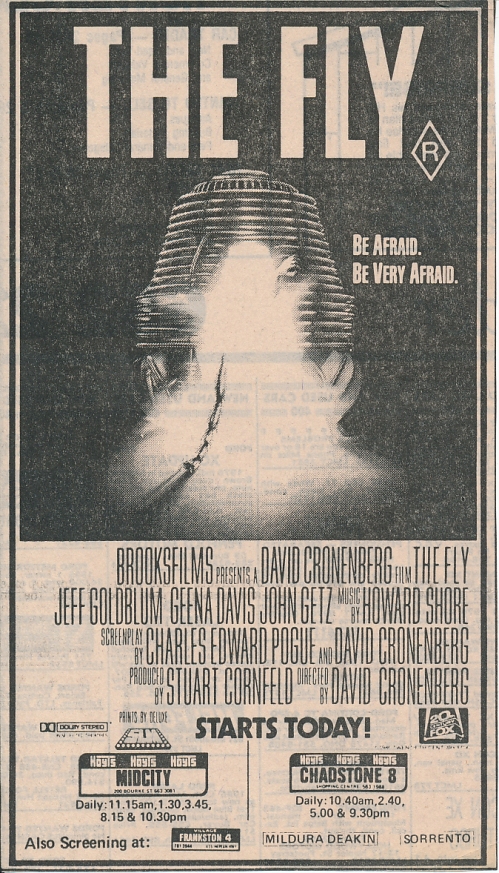 In 1986, David Cronenberg was tasked with remaking a very pulpy old horror flick that was iconic but definitely goofy to its core. The original tale of a scientist swapping heads with a fly is a silly concept, in both ethereal thought as well as final execution, but redrafting it through the body horror lens of Cronenberg was pure genius. I’d like to believe it was producer Mel Brooks who thought to approach the Canadian master of nasty shocks.

So Cronenberg came in and the result is a movie that swerves very far away from camp and becomes a parable about the AIDS generation that’s both disgustingly ghastly and ferociously terrifying while also being a heartbreak of decimating proportions.

You can probably thank Jeff Goldblum for making Seth Brundle, Mad Scientist M.D. the perfect foil for himself in this flick. When Goldblum is charming he is world devouring and we instantly connect with Brundle. He is sweet and kooky and disastrously intelligent. He is a perfect storm for which Veronica Quiafe will fall into and we buy it in every moment because we fall there, too.

This noir is exceptional because Brundle isn’t hard boiled, Quaife isn’t a femme fatale, and the world they inhabit is one hopeful and we watch it stripped of hope.

It is all very very real, which isn’t something you’d assume would come to mind for this remake if you were there before it landed.

Teleportation technology is at Brundle’s fingertips and with it so close he has to push on. Many would slow down on the accelerator when they find true love but Brundle is the kind of scientist who was initially married to science and he was never going to divorce. He could have extremely passionate women on the side but this is his path. And that sense of being locked in is what makes everything that follows feel so locked in.

The moment the fly enters the transportation pod with Brundle we get that sense of dramatic noir where we know it’s all going to play out one way and then we have to struggle through watching Brundle try to swerve off this deadly track with no luck. And we quietly observe Quaife watch the whole journey, trapped in the boot, and we can only hope she survives the crash we know Brundle won’t.

As Brundle starts to change due to his melding with the fly, he has hope. He documents these changes and sees the positive side. The strength, the ability just to engage with such mad science. He is abuzz. We all know what happens when you meddle with the unknown. You get radiation poisoning. You destroy Japanese cities. You fall and everything about you, everything with you, all that you do it for, is strapped to you and so it falls also.

And Brundlefly, as he becomes, falls hard. His body changes in good ways that soon crest into horrific jokes on the physical form. His skin cracks, his system adjusts, and it’s never anything but destructive to him. To the man.

Through it all, Quaife loves him, and tries to help. She isn’t just out for herself, she isn’t going to walk. Love is the strongest tie that binds through noir. The second is lust. And they went from one to the other and now their fall is joined. His is to fall and hers is to watch.

Veronica comes to discover she is pregnant to Brundle and cannot be certain when they conceived. Though a dream sequence where Veronica is in a birthing suite and Cronenberg himself acting as the gynecologist produces a grotesque larvae from her loins is something that makes you certain she is in her own noir spiral, but it’s a wider angle, and it’s a slower velocity, but it’ll get her too and now she knows it.

By film’s end, we all know it’s coming. Brundlefly is done, he’s a biological wasteland of possible science turned into probable death. He tries to drag Veronica into one final teleportation, to join him, and when it goes awry he is left off even more damage, a man-fly thing shedding flesh and humanity as he melds with the telepod itself. The result a techno-organic disaster that it should have seen coming but it kept on dipping back into the inky well as if the cause of the problem would suddenly affect a solution.

Finally, the ever hopeful brain of Brundle has finally given up. He’s beaten. But he doesn’t want to drag anything or anyone else down with him. He has done enough in his quest for more and now, in his final moments and acts, he wants to do less. Less damage.

He grabs the barrel of the shotgun Veronica holds and aims it at his head and it’s hideous which only serves to make it more heart rending. He takes himself off and his noir fall ends in a wet thud.

The kicker of a noir coda is that Quaife is indeed still tethered. She is pregnant, and we don’t even need to see it play out, we know it’s not the happy ending anyone would ask for. It’s the noir of uncertainty, which can and will plague you until you die [or a sequel stars your child – shout out to Eric Stoltz].

And all because we want to rise up, we fall so low and hard. Brundlefly is an example of how drive is good but the directions we choose are more important. THE FLY is a beautiful elegy of caution, forever caution.