Just loved every single panel in this crazy messed up book. It’s a wild idea, wrapped up by a wide array of intriguing characters, in a $10 intro trade, with some of the most nuanced and superb comic making I’ve seen in a while. Just an utter joy to behold – well, in a sense of how it is made…most of the actual narrative is as bleak as leftover coffee the next morning.

Just the best in show for everything, really. This year was S3 and it closed out the show and did it so masterfully that I’m still in awe. This is one of the few things I just keep bringing up to people and gushing to them about. It’s a show I want to share because it represents so many things about storytelling I love, and I wish I could do.

I’d love more seasons but I also love how tight and wonderfully this is all stitched up. This year, everything else paled in comparison.

And I mean hands down, best flick of the year. I crazy loved the idea but the execution was better. With a simple narrative throughline, they then explore emotions in such a deliberate and delightful way that my 5yo man dug it but I was floored by it. I cried twice in the damn flick and then when I got home and tried to explain it to the wife I started tearing up again. She thought I must’ve had a stroke. So good, and who knew we needed HERMAN’S HEAD the kid adaptation so bad?

Every time I listen to this podcast about using Kickstarter for making comics it inspires me to make some more comics. I just get the fire in the gut again. You need to have that fire, and stoke it, and shift it, and kick it, if you’re going to survive this stupid ride we repeat again and again making comics.

The ComixLaunch podcast is just gasoline all up in my bonfire of life. I was also on an ep, dig it, it’s all about kickstarting DEER EDITOR and doing a digital only campaign from Australia [LINK]

This ebook was like two bucks or something stupid and it was a tight, short, very interesting read. And I’m finding it hard to hang on to novels because they are taking me crazy amounts of time to get through so short novella stuff is just right and this book was aces [LINK]

Are there other best things from this year I should be considering? No app jumped out at me this year, and no way could I single out all the cool art I’ve been able to scope in my travels with collaborators, so I think this is it.

2015 was a building block year, and it built in me patience. Hopefully I can use it to calmly slaughter 2016.

I wanna talk about modern movies that might be better in B+W.

I recently read an old article discussing 10 modern flicks that would work great in B+W. The list is tight – watch the RAIDERS OF THE LOST ARK clip and tell me it’s not better in B+W. They also list THE LAST SEDUCTION which will always win my heart.

Now, if I ever have the chance, I want to watch some other flicks in black and white. I wish I could make some clips up now, but I’m a fool when it comes to this sort of rad stuff, so instead I’ll purely list some titles with some chatter – and I’ve done a few pics because I love you all so much. I hope you dig.

THE PROPOSITION – this Aussie western noir is possibly the best flick this country has ever produced. It is damn good. It’s shot with some amazing colours – all drab and moody – but I’d love to take a stab at it in B+W. 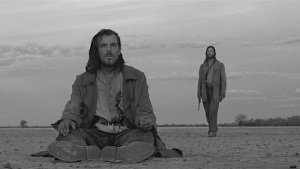 SE7EN – this seems like a no brainer. The flick is already so rainy and nasty, but as a B+W, man, that mood would just drop.

CAPTAIN AMERICA: THE WINTER SOLDIER – This is more an experiment than any sort of guarantee, but I think it’d change the impact of the violence and the tone of the piece and the whole would come out even further grounded and dark. I mean, look below, that’s pretty tight, right? 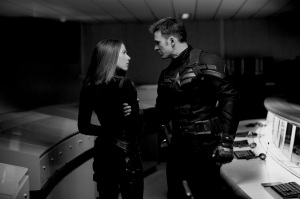 INCEPTION – maybe this would work. I’d certainly be down to see it try.

ENTER THE DRAGON – I actually don’t think this would work, but I am all down for trying. Who knows, right?

BODY HEAT – I had to pause and reflect on whether this already is B+W but it’s not, and it totally should be.

PONTYPOOL – the visuals run second fiddle to the sound on this one anyway, so why not mute them? Make this underground radio station really feel claustrophobic.

PAN’S LABYRINTH – del Toro shoots with such certainty and passion that’s it’s difficult to suggest altering his vision but look at the photo below, tell me this wouldn’t work?

THE EVIL DEAD – another I had to wonder if it wasn’t already B+W. Low budget, one location, spooky jumps – this would work for B+W so well.

MILLER’S CROSSING – this film feels like it would work, so I’ll give it a go, but there is uncertainty in my heart.

VIDEODROME – there has to be a Cronenberg in this bunch. I think this would take on a more weary bleak tone in B+W and that would be just fine.

BRICK – bit of a gimme really. An obvious choice but one that would be so cool to see.

THE LOOKOUT – an oft forgotten gem from Scott Frank, The Lookout is a twisted weird heist flick, and it would only bury deeper into itself with this lack of colour.

THE ROCKFORD FILES – I would watch all of this.

I’d be interested to know your suggestions for some B+W flicks (or TV). I know, for me, thinking of B+W TV reminds me of watching old midday movies with my mother, old Hitchcock flicks, old moody pieces that shaped my pre-teen years. Just looking at the B+W pics above stirs a response in me. I love B+W flicks. I wish I had more time for them.